On a yearly basis, New York City produces nearly 15 million tons of waste. And while some of that amount is transported to landfills (in and outside the city), a large portion of it is spread throughout the streets and waterways due to poor waste management.

The first reason for that is that NYC is one of the most polluted cities in the world, so collecting the garbage is a logistical nightmare for both the city government and the private waste haulers.

In addition, the lack of legislation ban on disposal items has led to the excessive usage of plastic ones (nearly 18 000 tons of single-use plastics are wasted every year). Even with the ongoing programs initiated by the government to stimulate the residents to recycle and compost, the City is still very polluted.

When Did it All Start?

In the 19th century, New York faced a crisis: limited land territory and constantly growing population. With more residents came more waste that needed to be disposed of.

At first, people used to fill water lots with garbage in order to create more land for new buildings and residential homes. But very soon the expansion of the land started to disturb the routes of the passing ships. So, the next “brilliant” idea was to throw the garbage directly into the ocean which also became problematic due to water pollution.

One century later, waste incineration became very popular, yet the process was quite expensive, so it was quickly replaced by landfills. Once again, the solution didn’t stick for too long as NY residents were concerned about their health and the environment.

From 1995 onward New York began to export its waste to several other states in an attempt to please everybody. Unfortunately, the population in the city continued to grow and this method for waste disposal could not catch up with a large amount of produced garbage and the lack of legislation regulations.

How Does it Look Today?

Nowadays, waste management in New York is divided into a public and private system. The public system covers the majority of the produced trash – residential and institutional garbage. It is then collected by DSNY (New York Department of Sanitation) – the world’s largest sanitation department. The private system is held by licensed companies offering waste removal services.

In 2016, DSNY initiated its first Strategic Plan which builds on the Department’s 2006 Solid Waste Management Plan for exporting waste by rail and barge. The Strategic Plan has a set of ambitious long-term goals and initiatives to improve New York’s waste management.

One way the Department attempts to diminish the waste in NYC is by advocating for reduction, reuse, and recycling on a regular basis, as New Yorkers are throwing out more than 10,000 tons of trash every day. The good news is that DSNY collects over 2,000 tons of recyclable waste per day, yet it’s still not a satisfying number.

Since, one-third of the city’s waste is mainly food scraps, the Sanitation Department recommends that people start composting. In addition, there are curbside collection services available for the residents when they want to get rid of items harmful to the environment like household and automotive products, and electronics.

In 2019, the SWMP managed to switch to marine and rail transfer stations which led to the reduction of truck traffic by 60 million miles per year and greenhouse gas emissions by 34,000 tons per year.

How is The Waste Collected And Disposed Of?

What DSNY collects is divided into several categories: trash (for non-recyclable items), recyclable items (paper, metal, glass, and plastics), food scraps, yard waste (including composts), harmful products, and electronics. In addition, the Sanitation Department offers the residents the option to donate their goods to be reused for those in need.

Once the waste is collected, it is usually transported to landfills and incinerators outside the city. This method might be freeing space in New York and pleasing its citizens but is creating environmental problems in the states where it’s disposed of.

As for the commercial waste, the government doesn’t collect it, so businesses in New York have to arrange themselves on how to manage both their garbage and recyclables.

For each business owner in NYC, there are two options available: to apply for permission and haul their own garbage (which requires time and effort apart from their business) OR to hire a private and experienced waste removal company to do it instead.

In the past, waste haulers were related to the mob. Especially in New York and Chicago, mobsters started their own companies for waste removal or acquired existing businesses (via violence, for example) in order to exercise monopoly in the city and beat the competition.

Within time, the garbage mobsters were slowly replaced by big corporate companies offering garbage collection and recycling services. In addition, the NYC government created the Business Integrity Commission which controls and authorizes licensed carters and self-haulers to work on the territory of the city.

We are proud to be part of BIC’s list for nearly 20 years now. Metropolitan Recycling is one of the largest private waste removal companies in New York which offers a variety of collection and disposal services. 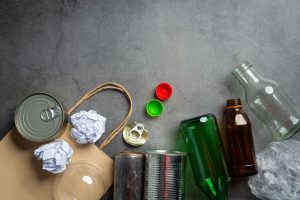 Whether you are looking for waste removal, recycling, or organic recycling services, we have plenty of options to fit your needs and your budget. Apart from the non-hazardous solid waste, we collect plastic containers, glass containers, paper and cardboard products, and metal (tin, aluminum, steel) cans.

We are constantly investing in new recycling technologies like BIO-EZ – a food waste disposal system that transforms organic waste into nutrient-rich water by breaking down food scraps and even light paper items.

Our mission is to facilitate our clients in their waste management while minimizing the environmental impact on our planet.